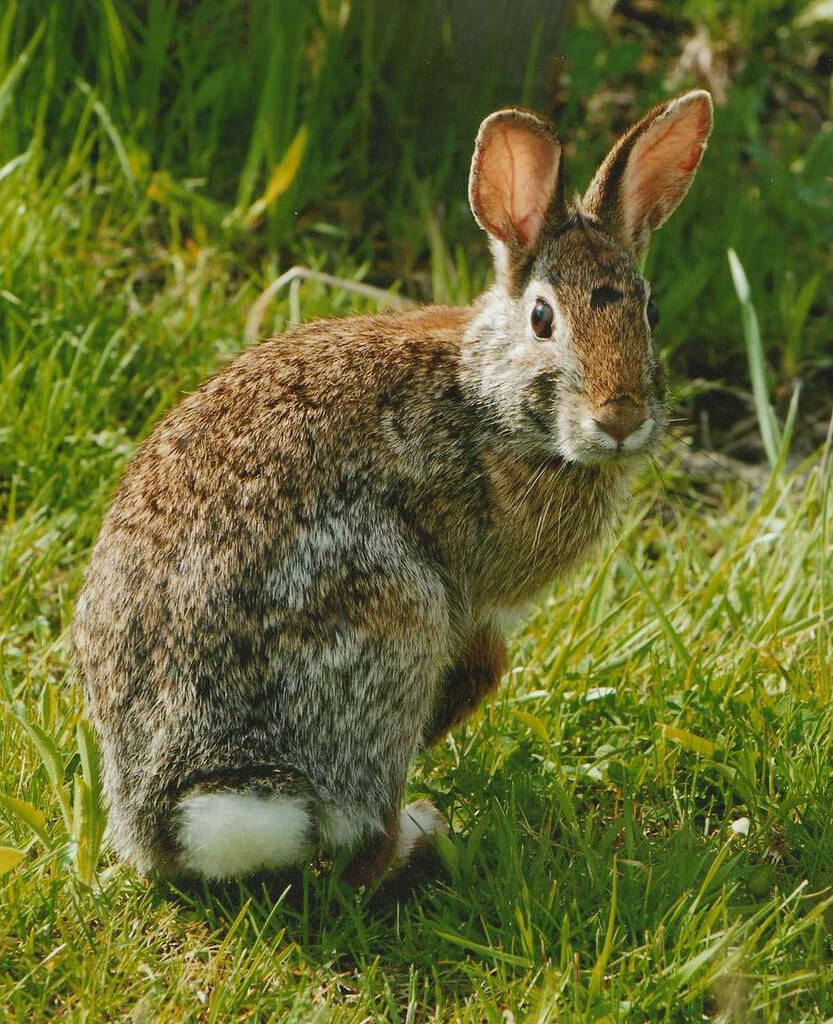 The eastern cottontail rabbit is found throughout Ohio. The cottontail is reddish-brown to gray along the back and sides, while the underside is gray to white. The underside of the tail is snow white and is very bright when the rabbit runs, thus the name “cottontail.”

Reproduction: Cottontails usually mate in January or February, and by the first of March, most of them would have mated. About 28 days after mating, the young are born, given a quick bath by the female, and placed in the nest. Young rabbits grow extremely fast. By the end of the first week, they have their eyes open, and by the end of the second week, they are beginning to leave the nest and feed on green plants. At this time they still weigh only about four ounces but are well developed and able to survive on their own. Litters may range from three to nine, with four or five about average.By six months, the young have reached the minimum adult weight and are hard to distinguish from adults.

Food Habits: The cottontail’s weight at maturity is 2 1/2 to three pounds. Almost anyone who has found a newly planted seedling cut off or tree bark damaged may consider the cottontail a pest.

What our clients Are Saying

Critter Removal is AWESOME!! Would use them again in a heart beat! Reasonably priced, Great service both in office and technicians ( Way to Nate!) Just a great RELIABLE company. A++

They did what they said they would do. Is great job.

We were dealing with a pretty bad squirrel problem. They were causing damage to my soffits and gutters getting into their nest in our attic. We had a previous company come out, insist it was a raccoon and simply put a cage in our bushes. Meanwhile the squirrels continued to do their damage, leaving their route into our attic crawl space wide open. About 4 weeks later and having to listen to constant scratching and chewing from these squirrels, he simply collected his empty cage without follow up, and having to pay upfront first ( 500 + dollars for a cage and a peanut butter smear) Luckily after an email asking to maybe do something more, they just sent a refund. So we were back to square one, I called critter control and they came out the next day. They installed a one way door in the hole they were using to access their nest. In and out in about 30 minutes. Payment wasn’t due until after the issue was handled. We saw immediate results. In less than a day our squirrel friends had moved on to a new home somewhere not in our attic. Friendly, fast, and professional. They may not be the least affordable option, but the results were fast and we were very happy

The technicians came to my home, inspected the area, setup a trap, very professional, great job

Returned my message within the hour., Listened to my situation and Explained the cost process. .Scheduling was very quick. Gentlemen that showed was on time, seemed very knowledgeable and answered ALL my questions . Received my quote quickly. Everyone from office to on site employee were very professional .